Tailwind is a utility-first CSS framework for rapidly building custom designs. It can be used alone to style React Apps. However, it can be better combined with Styled Components. That combination brings the magic of Tailwind into CSS-in-JS.

In this guide, we will build a form component without writing a single line of CSS using Tailwind CSS, Styled Components, and Twin Macro.

Sorry for the interrupt!

If you're interested in learning React in a comprehensive way, I highly recommend this bestseller course: React - The Complete Guide (incl Hooks, React Router, Redux)

It's an affiliate link, so by purchasing, you support the blog at the same time.

The "Why" is pretty legit and important, since we can use either Tailwind CSS or Styled Components. So why combine them and use both at the same time? Well, Tailwind classes can be quite long, and it causes our components to have some readability issues. Maintaining them can be tough.

In the case of Styled Components, there is no problem except the fact that we have to write the style. It is not that problematic – but why should we write something that Tailwind already offers?

In this guide, we will build a simple form as an example. And to do so, we need a fresh React app. So, let's run in the terminal the following command.

Next, structure your folder as follows:

I will explain each file as we progress, but for now, let's install the dependencies.

Next, install Styled Components by running this command.

Once these libraries are installed, we can now move to the configuration of Tailwind CSS

To configure it, we have to manually add a config file or run the following command to generate a new one:

Here, instead of generating the config file on the root directory, you have to put it in the src folder - otherwise an error will be thrown by Twin Macro.

As you can see, the config file is "empty" since there is no configuration. For this tutorial, we don't need to configure anything here. But you can customize it to follow your needs or run the command with the --full option to get the complete Tailwind config.

Next, we need to create a new file postcss.config.js in the root directory.

This configuration tells the postcss.config.js file to use the Tailwind CSS library and the tailwind.config.js file during compile-time. With the help of autoprefixer it tracks which properties need to be prefixed.

With that setup, we can now move to the babel.plugin.js file which helps to transform Tailwind classes into CSS-in-JS code.

Later we will see in action what this file does. But for now, just keep in mind that it's the glue between Tailwind CSS and Styled Components.

There are just three last steps to do to complete the setup.

First, in the tailwind.css file, we need to import some utilities from the Tailwind library.

Here, as you can see, there is nothing fancy, just some imports that allow us to use Tailwind utility classes.

The second step is to connect our React App with Tailwind CSS.

And last but not the least, we have to update the package.json file.

These two scripts build:css and watch:css will respectively build the CSS and watch for changes and rebuild it if needed. And as I said earlier, the output file will be located in the assets folder.

With that change, we can now use Tailwind in our app. Let's now combine it with Styled Components.

Earlier, in our structure folder, we had a styles folder. It's time to tweak it with the following code.

We start by importing tw which allows us to use Tailwind classes in nested properties. It's perfectly fine to use the utility classes with the className attribute, but if you want to nest properties you have to use the twin.macro library.

This library will use the babel plugin macros config (babel.plugin.js) to transform the Tailwind CSS utility classes used by nested selectors into readable code that Styled Components can understand.

You can see in this example below how the transformation is done.

Great! Now that we have combined Tailwind with Styled Components, let's add the styled component to the App.js file.

Here, we just imported the styled component and wrapped everything with it to make our form look nice. 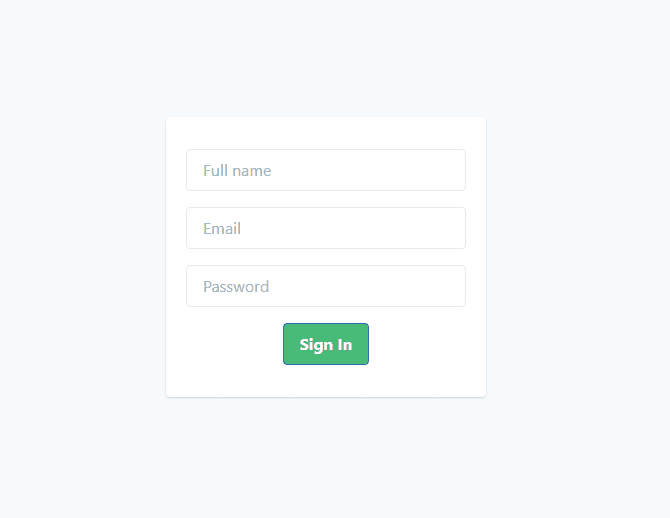 Great! You can already see how powerful this combination is. We have built a form component without writing a line of CSS and the component is still readable.

There is a bit of hassle to set up Tailwind CSS. But once it's done and combined with CSS-in-JS, it's really powerful and flexible. This is partly because we can customize the tailwind.config.js file to follow our need or just write normal CSS as we usually do with Styled Components. It's definitely something to consider in your next React app.

You can find the Source Code here

#react#tailwind#styled-cmp
How To Build Finite State Machines using XState and React?How to build a GraphQl API from scratch with Node JS, Express, and MongoDB

Buy me a coffee

Get articles in your inbox