TypeScript is a superset that needs to compile to plain JavaScript. It offers more control over your code since it uses type annotations, interfaces, classes, and static type checking to throw errors at compile-time. TypeScript helps to enhance code quality and understandability, especially with a large codebase.

In this guide, I will lead you through TypeScript by learning first all the basics needed to start with this great language, and then finish up this article by building an app from scratch using HTML, CSS, and TypeScript.

Sorry for the interrupt!

If you're interested in learning TypeScript in a comprehensive way, I highly recommend this bestseller course: Understanding TypeScript - 2020 Edition

It's an affiliate link, so by purchasing, you support the blog at the same time.

TypeScript is an object-oriented programming language developed and maintained by Microsoft. It's a superset of JavaScript, meaning that any valid JavaScript code will also run as expected in TypeScript. It has all of the functionality of JavaScript and some additional features. It needs to be compiled to plain JavaScript during runtime, therefore a compiler is needed to get back the JS Code.

TypeScript uses static typing, meaning that you can give a type to a variable during declaration. And it's something that can't be done with JavaScript because it's a dynamically typed language, it does not know the data type of a variable until it assigns a value to that variable at runtime.

Static type checking makes TypeScript great because it helps to throw an error at compile-time if the variable is unused or reassigned with a different type annotation. However, the error does not block the code from executing, the JavaScript code will still be generated.

Now, let's start using TypeScript in the next section to see it in action.

As I said earlier, TypeScript needs to compile to plain JavaScript, hence we need to use a tool to do the compilation. And to have access to that tool, you need to install TypeScript by running this command on the terminal.

Or if you are using npm:

Note that here I use the -g flag to install TypeScript globally so that I can access it from anywhere.

By installing TypeScript, we have now access to the compiler, and we can compile our code to JavaScript. Later we will dive into it and what it does, but for now let's add a configuration file to our project. It's not mandatory to add a config file - But for many cases, it's useful to have it since it allows us to define rulesets for the compiler.

tsconfig is a JSON file that helps to configure TypeScript. Having a config file is better since it helps to control the behavior of the compiler. And to create the config file, you first need to create a new directory named Pokedex and browse into the root of the folder. Then, open it on the terminal or an IDE and run this command to generate a new TypeScript configuration file.

Once the file generated, we can now explore it on an IDE.

This config file is much verbose than that, I removed the comments and unused values to make it easy to read. That said, we can now break down these values, explain each, and what it does.

With that in place, we can now dive into one of the most important parts of TypeScript: the Types

Types provide a way to enhance code quality and understandability since it defines the variable types. They are optional and help first to define what a given variable should have as value and also allows the compiler to catch errors before runtime.

TypeScript has several types such as number, string, boolean, enum, void, null, undefined, any, never, array, and tuple. We won't see all types in this guide, but keep in mind that they exist.

As you can see here, we have three variables with different types. foo expects a string, bar, a number, and baz, an array of string. If they receive anything else than the type declared, an error will be thrown by TypeScript.

Now, let's try to reassign one of these variables and see how TypeScript behaves.

TypeScript will throw an error because we have already declared foo to expect a string as value. And this error is caught at compile-time which makes TypeScript great and useful.

With TypeScript, types can be explicit like we did above, however, they can be also implicit. It's better to explicitly define the type of a given value because it helps the compiler and the next developer who inherit the code. But you can also declare variables with an implicit type annotation.

TypeScript will try here to infer as much as it can to give you type safety with less code. It will take the value and define it as a type for the variable. And nothing will change regarding errors.

Let's try to reassign these variables to see what's will happen.

TypeScript will catch the errors like before, even if variables types are declared implicitly.

When dealing with an object of several properties, it can be tricky and annoying to define the types. But luckily, TypeScript has something to help you along with that use-case. So, let's dive into TypeScript Interfaces and Type aliases in the next section.

Interfaces and Type aliases help to define the shape of an object-like data structures. They seem like the same regarding their structure, but keep in mind that they are different. However, the consensus amongst developers is to use interface whenever you can since it's in the default tslint ruleset.

Now, let's create an interface and a type alias in the next section to see them in action.

As you can see, the structure of an interface and a type alias looks like a JavaScript object. They have to define the form of a given data with TypeScript.

Notice that here, I use an optional field name by adding a question mark (?). It allows making the property name optional. That means if no value is passed to the property name, it will return undefined as value.

Next, we use the interface ITest as a type for the argument received by the function myTest. And as with variables, functions can also be defined to return a specific type. And here, the return value must be a string otherwise an error will be thrown by TypeScript.

So far, we have covered all the basic knowledge needed to get started with TypeScript. Now, let's use it to build a Pokedex with HTML and CSS.

The project we are going to build will fetch remote data from the Pokemon API and display each pokemon with TypeScript.

So, let's start by creating three new files in the root of the folder Pokedex: index.html, style.css, and src/app.ts. And for the configuration of TypeScript, we will use the same tsconfig.json file created earlier.

Now, let's move to the markup part and add some content to the HTML file.

As you can see we have a relatively simple markup. There are two important things to retain though: the id app of the div tag that will be used to append the content using TypeScript and the script tag that points to the public folder and to be precise the JavaScript file that TypeScript will create for us during compile time.

Besides, the CSS file is a bit long, so I won't cover it so as not to waste your time and stay focused on TypeScript. That said, we can now dive into it and start fetching data from the API.

We start the TS part by selecting the id app which is the id of the div tag.

Here, we have a type annotation that has not to be covered yet. This is a Union Type which allows having alternative types for a given variable. That means if container is not of type HTMLElement, TypeScript will check again if the value is equal to the type after the pipe (|) symbol and so forth because you can have multiple types.

Next, we have an interface IPokemon that defines the shape of a pokemon object which will be used next in the function responsible for displaying the content.

The function fetchData allows us to loop through the number of pokemon to retrieve and for each object call getPokemon with the pokemon number.

It may take time to fetch data, hence we use an asynchronous function that returns a Promise of type void. This last means that the function won't return a value.

And once the data fetched, we can now create a new object transformedPokemon that mirrors the interface IPokemon, and then pass it as an argument to showPokemon().

As you can see, the function showPokemon receives as a parameter the pokemon object of type IPokemon and returns void or no value to be precise. It will just append the content to the HTML file with the help of the id container (remember, it's the div tag).

Great! we have now done a lot, however, something is still missing because the index.html file will display nothing if you try to launch it in the browser since TypeScript needs to be compiled to plain JavaScript. So, let's do that in the next section.

Earlier in this tutorial, we installed the TypeScript compiler which allows compiling the TS code to JavaScript. And to do so, you need to browse into the root of the project and run the following command.

This command will compile every file with .ts extension to JavaScript. And since we have a tsconfig file, the compiler will follow the defined rules and compile only the TS files located in the src folder and put the JS code into the public directory.

The compiler also allows compiling only a single file.

And if you do not specify a name after the TS file (myFile.ts), the compiled JS file will take the same name as the TS file.

And if you want to not execute the command on every change, just add a -w flag to let the compiler keep watching for a change and recompile the code when needed.

And now if you launch the index.html file, you will see your Pokedex successfully rendered in the browser. 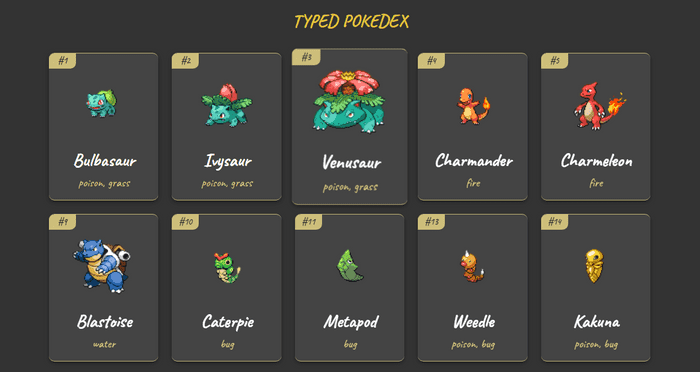 Great! we have now done learning the basics of TypeScript by building a Pokedex app with HTML and CSS.

Here some useful resources to dive deeper into TypeScript.

#typescript#html#css
Advanced TypeScript Types cheat sheet (with examples)Apollo GraphQL: How to build a Full-stack app with React and Node Js

Buy me a coffee

Get articles in your inbox